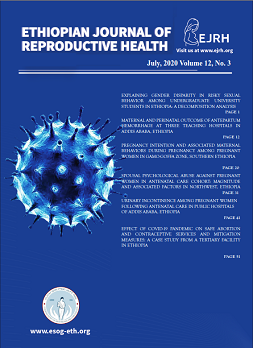 This was a cross-sectional study in which the International Consultation on Incontinence criteria qualified Questionnaire was administered in July 2015, to 333 consenting pregnant women aged 15 to 42 years who were attending Antenatal care at, tertiary Hospitals, in Addis Ababa, Ethiopia.

This study showed that many pregnant women in Ethiopia suffer in silence from a variety of lower urinary tract symptoms. There is need to create awareness among women with symptoms as nearly two third (64%) of those with daily episodes of urinary incontinence do not seek help. Health care providers must build their capacity to recognize, investigate and manage lower urinary tract morbidities in pregnancy