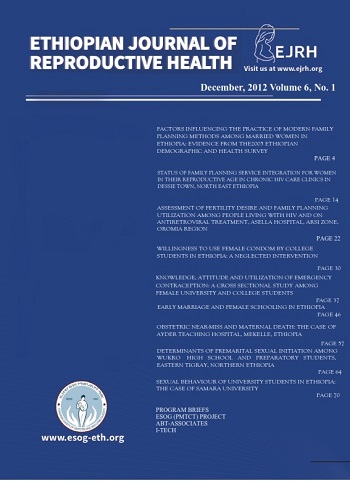 Abstract
Background: Early marriage, defined as marriage below the age of 18, is associated with numerous adverse health and
economic consequences for young girls. In Ethiopia, more than half of girls are married by the age of 18, while only one in
eleven women have completed primary school. The scientific literature suggests that early marriage is associated with
limited educational attainment, which in turn limits women’s future economic opportunities. However, few studies have
rigorously explored the association between marriage timing and educational attainment after accounting for selection bias.
Objective: This paper examines the educational gains associated with delayed marriage in Ethiopia.
Methods: The study is conducted using the 2011 Ethiopian Demographic and Health Survey. The analytic subsample
consists of 11,154 women between the ages of 20 and 49 who are currently married. Bivariate associations are estimated
using unadjusted odds ratios. Propensity score matching techniques are used to estimate the effect of early marriage on
educational attainment after adjusting for selection bias.
Results: As hypothesized, delayed marriage is strongly associated with increased educational attainment, even after
accounting for selection bias. Marriage above the age of 18 is associated with 2.8 times greater odds of completing primary
school compared to marriage below the age of 18. In addition, delayed marriage is estimated to increase educational
attainment by 2 years.
Conclusion: Findings imply that successful programs and policies to delay the age of marriage can have a significant
impact on women’s education in Ethiopia and prevent adverse health effects (Ethiopian Journal of Reproductive Health ,
2012, 6(1): 46-55).
2California Center