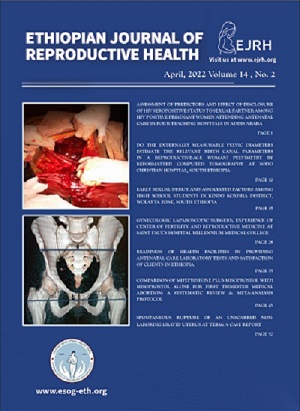 Background: It is very crucial that women have the ability to disclose safely the status of being HIV-positive to male partners for the uptake as well the continued use of methods of mother-to-child transmission (PMTCT) services. The majority of the women are afraid to disclose their serostatus to their partners due to denial, blame, physical violence, and lack of financial support. Because of these reasons they discontinue the ANC follow-up and ARV medication for them as well as the baby. In Ethiopia, there are not many studies done to exploring HIV positive status disclosure to partners, the predictors, and the effects of disclosure of HIV positive status among HIV positive women during pregnancy.

Method: A cross-sectional study was conducted among 328 HIV-positive pregnant women who were attending ANC in four teaching   Hospitals in Addis Ababa. Data was collected using a pretested structured questionnaire and SPSS- 21 version was used to analyze the data.

Result: Among the study participants 80% of the women had disclosed their HIV status to their partner. Presence of partner discussion before HIV test, the duration of the relationship between the couples, and knowing partner’s HIV status were found to be strongly associated with their disclosure and those with status disclosure to the partners are 12 times more likely to utilize the PMTCT services than those with no disclosure (COR 12.01(3.64-39.81).