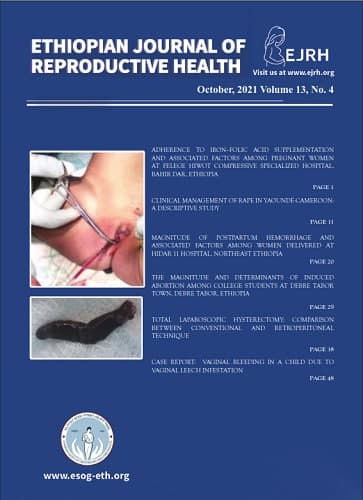 Background: Abortion is a sensitive and contentious issue with religious, moral, cultural, and political dimensions. Out of an estimated 210 million pregnancies that occur in the world each year, 38% are unwanted, of which 22% end up in abortion. Globally, 358,000 women die each year as a result of causes related to pregnancy and childbirth. Abortion is one of the top five causes of maternal death in Ethiopia. Therefore, this study was conducted to assess the magnitude and associated factors of induced abortion among college students in Debre Tabor Health science college, Begiemidir teachers’ college and Fekede Egzi college.


Methods:  An institutional based cross-sectional study was conducted from February 3 to May 28,2021. A total of 236 female students were recruited from Debre Tabor Health Science College, Begiemidir Teachers’ college and Fekede Egzi college using systematic random sampling technique. The data were collected using self-administered questionnaire, and data analysis was done by SPSS version 25.0.

Result: The magnitude of unintended pregnancy and unsafe induced abortion was 59.8% and 18.6% respectively. Out of the total study participants, 91(38.6%) did use emergency contraceptive pills following unprotected sexual intercourse. Majority 44(75.9%) of abortion was induced. Out of respondents who had induced abortion 22(50%) were attended by their mother.

Conclusion: The prevalence of induced abortion was generally high in the study area. Department, year of study and condom use were strongly associated with induced abortion.