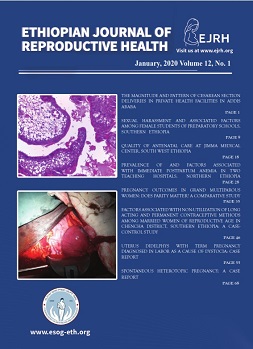 Background: In many developing countries like Ethiopia, access and the utilization of LAPCMs is very low and it also difficult to find them from many reproductive health programs.  The aim of this study was to assess factors associated with non-utilization of long-acting and permanent contraceptive methods among married women in the reproductive age (15-49 years).

Methods: A community based unmatched case-control study was conducted in Chencha District, Southern Ethiopia from November 2015 to December 2015.  Cases were those women who used contraceptive methods other than LAPCMs and women who were not using contraceptive methods. Controls were women who used LAPCMs in their lifetime. Study participants were selected by simple random sampling with proportional allocation to the population size. Records were reviewed and then by tracing their address, the selected samples were interviewed. We analyzed data using SPSS version 20.0 and logistic regression models to identify associated factors.

Results: We enrolled 328 women: factors associated with non-utilization of LAPCMs were identified:  Partner’s lower level of education (p=0.003),  less number of live children (p= 0.04 ,  preference to have children in the future (p=0.042), husband’s approval to LAPCMs ( p=0.002), not informed to use contraception (p= 0.006), started using contraceptives during campaign  ( p= 0.021)  and discussion with health professionals (p= 0.039) were predictors of non-utilization of LAPCMs.

Conclusion: Quality of health service, knowledge are among factors associated to Non-utilization of LAPCMs in the district.  Interventions to improve utilization of LAPCMs in the area should focus on couple’s knowledge, approval and use of family planning and training of service providers in quality care, especially about counseling about family planning, the rights of clients, informed the choice of contraceptive methods