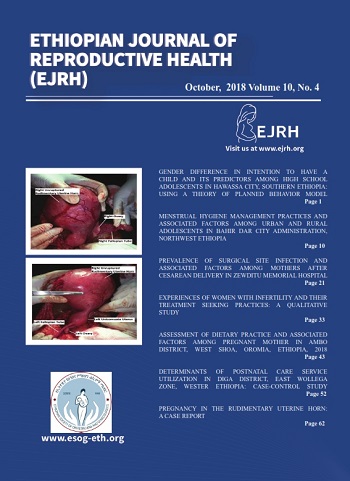 ABSTRACT
BACKGROUND: Adolescent pregnancy is a public health concern worldwide. In developing world, onethird to one-half of women becomes mothers within 19 years of age. In Ethiopia, teenage pregnancies and deliveries is common, which has been associated with consequences including school dropout, high infant and maternal mortality and morbidity.
OBJECTIVE: To determine gender difference in intention to have a child and its predictors among high school adolescents in Hawassa City, Southern Ethiopia from February to March 2015. METHODS: A comparative cross-sectional study was conducted in selected high schools of Hawassa City. Eight hundred sixteen adolescents were enrolled in the study using stratified sampling technique. Data were collected by using self-administered questionnaire. The collected data were entered and analyzed using Epi-data version 3.1 and statistical package for social science version 20 statistical software respectively. Multivariable linear regression model was used to compare intention to have a child by gender and other predictors. RESULT: Eight hundred seven adolescents participated in the study making the response rate of 98.8%. More than half of the respondents 470(58.5%) were in the age category of 15-17 years and 403(49.9%) of them were female. The proportion of adolescents who had desire to have a child before 20 years of age was 56(6.9%). Attitude (β=0.165, p<0.001), subjective norm (β= 0.408, p<0.001) and perceived behavioral control (β=0.168, p<<0.001) were significantly associated with intention to have a child. Being female (β= 0.0.021, p< 0.048), age group of 18-19 years (β= 0.0.041, p=0.021) and having low school performance (β=0.064, p=0.038) increases the intention. While in grade 12th adolescent students (β=- 0.034, p=0.03) and for those having good knowledge about family planning, pregnancy and related complications (β=-0.109, p=0.002) the intention to have a child decreases significantly. CONCLUSION: There was a gender difference in intention to have a child. Females had more intention than males. The theory of planned behavior variables was found to be significant predictors of intention to have a child. While working to control adolescent pregnancy, focus should also be given to their referents and changing their perception of on the understanding of their controlling ability. KEY WORDS: Adolescent Pregnancy, Intention to have a Child, a theory of planned behavior mode, Southern Ethiopia (Ethiopian Journal of Reproductive Health; 2018; 10; 4: 1-