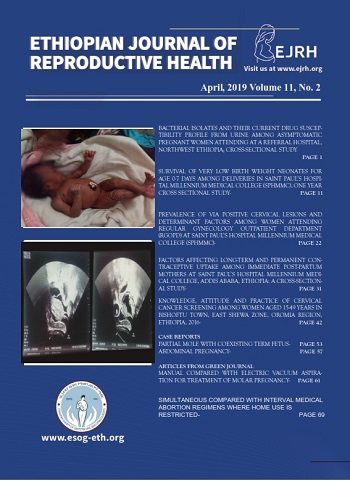 BACKGROUND: Asymptomatic bacteriurias (ASB) are common during pregnancies thatcould have potentially serious consequences for maternal and fetal health. The rapid emergence of antimicrobial resistance necessitates continuous monitoring of the susceptibility patterns of pathogens.
OBJECTIVE: The purpose of this study was to identify bacterial pathogens from asymptomatic pregnant women attending antenatal clinic and by extension to determine the antimicrobial susceptibility profile of these isolates. METHOD: A cross-sectional study was conducted at Felege Hiwot Referral Hospital (FHRH) from February 1 to May 30, 2016. Freshly voided clean catch midstream urine samples were collected and processed using conventional culture and biochemical tests as per the standard protocol. A concentration of >105 cfu/ml in urine sample was considered culture positive for ASB. Isolates were tested against the commonly used antibiotics by Kirby-Bauer disc diffusion methods. The degree of susceptibility pattern was determined based on the Clinical Laboratory Standards Institute. Descriptive and Chi-square test was done using SPSS version 22, p < 0.05 was considered to be significant. RESULTS: A total of 234 study participants were involved in the study. The mean age of participants was 26.8 years (ranged 18–41 years). The majority, 139 (59.4%) of them were multigravida. Most of the participants at 134 (57.3%) were in the 3rd trimester. Among the study subjects, 20 (8.5%) were HIV sero-positive. Out of the 234 pregnant women 11.5 % (27/234) were positive for ASB. History of diabetes was significantly associated with ASB (p=0.019). A total of 27 bacterial uropathogens were identified. Out of these, Gram positives consisted at 20 (74.1%). The predominant isolates were S. saprophyticus at 48.2% (13/27) followed by S. aureus at 22.2% (6/27) and E. coli at 11.1% (3/27). Eleven (84.6%), 10 (76.9%) and nine (69.2%) of 13 isolates of S. saprophyticus were found resistant for co-trimoxazole, oxacilin and tetracycline, respectively. CONCLUSIONS: In the studied area, the prevalence of ASB was at 11.5 %. Considerable drug susceptibility profile of the isolates was documented. Thus, efforts should be given to decrease the effect of ASB and antimicrobial resistance.
KEY WORDS/PHRASES: Asymptomatic bacteruria, antimicrobial resistance, Bahir Dar